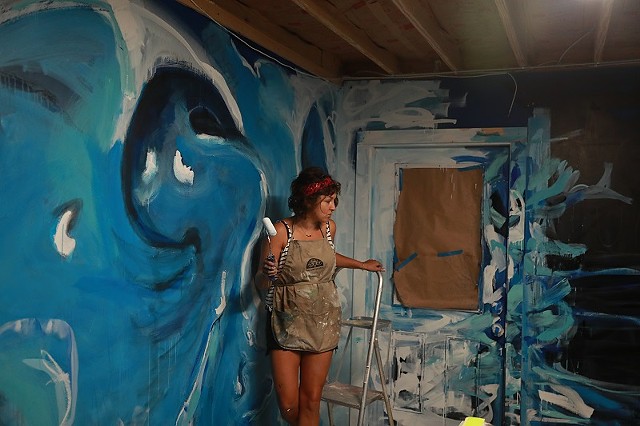 Statement: "To me, art is about losing yourself and tapping into something larger- suspending time in wonder- angst- and hope."

Flynn works with the concept of nostalgia in her paintings, often beginning with a specific experience or memory, sometimes based on her's or other's photographs. She plays with paint like its memory-sometimes thick, lush, and vibrant, other times thin and fading away. Flynn intentionally keeps her figures loose and gestural, her land and seascapes broad and dreamy, because she wants to strip the image of its specificity.  Her goal is to create paintings that use the personal to access the universal, allowing viewers to drift away into their own memories to a time that resonates and inspires wonder. Bio:

Caitlin Flynn was born in Nashua, New Hampshire and received her Bachelor's of Arts from the University of New Hampshire. In high school Flynn attended figure drawing classes at the Art Institute of Boston. In 2006 she moved to NYC and earned her Master's degree from Pratt Institute. Flynn has exhibited internationally. She lived and exhibited in NYC and Brooklyn for 6 years before moving to Neptune Beach, FL. Flynn currently exhibits throughout Jacksonville with different artist groups and galleries. Galleries: 2018 - Present, Stellers Gallery, Jacksonville, FL http://stellersgallery.com/ 2019- Present, Women Made Gallery, Chicago, IL https://womanmade.org/artwork/caitlin-flynn/